2017 “Little Wake.” CHEAP POP. April 27—Nominated for The Pushcart Prize & for The Best of Small Fictions.

2016 “What Will We Do Will All This Grief.” Journal of Compressed Creative Arts, November 7.

2015 “A Mermaid’s Purse Is Also Called A Devil’s Pocketbook.” Hermeneutic Chaos Literary Journal. Issue 6. 7 January.—Nominated for the Sundress Publications’ Best Of The Net 2015.

2021 “Five from the Archive—Sex in Flash.” Smokelong Quarterly Flash in the Classroom Series. June 20.

2021 “Five from the Archive — Long Periods of Time in Flash.” SmokeLong Quarterly Flash in the Classroom Series. January 12.

2015 “Books To Read, Books To Give, Women Who Flash Their Lit.”  Bartleby Snopes Writing Blog. December 21.

2020 Food Memory As Narrative and Character in Flash Creative Nonfiction, Oct 15-17 and forthcoming in spring 2021.

2020  Eckerd College Alumni Roundtable “Having It All and Other Lies: Roundtable on Life’s Expectations.” November 20.

Sisters in Crime, October 2019 to present

This work by April Bradley is licensed under a Creative Commons Attribution-NonCommercial-NoDerivs 3.0 Unported License unless attributed otherwise. 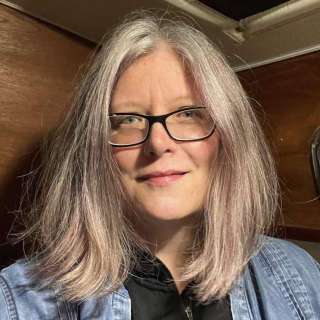 April Bradley is a Durham, North Carolina-based writer and editor. Her work appears or is forthcoming in Blink Ink, CHEAP POP, CRAFT, JMWW, Narratively, Smokelong Quarterly, and numerous other publications. Her fiction and essays have been honored by residency support from Vermont Studio Center and Rivendell Writer’s Colony. She is the publisher and editor of Ruby Literary Magazine and Press and serves as an associate editor for fiction at Pidgeonholes and as a submissions editor at SmokeLong Quarterly. April is a Best American Essays, Pushcart Prize, Best of Microfiction, and Best of Small Fictions nominee, and a graduate of Eckerd College and Yale Divinity School. Find her on Twitter at @april_bradley. If you’d like to reach April, please fill out the following contact form or write via email: aprilbradley {dot} com {at} gmail {dot} com.